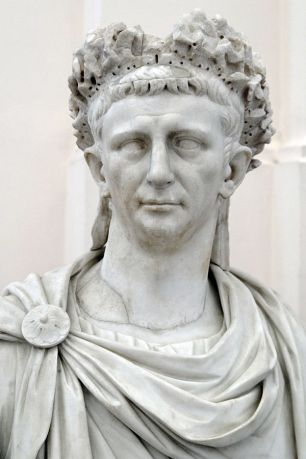 He wrote, “For rulers are not a cause for fear for good behavior but for evil. Do you want not to be afraid of the authority?”

In AD 49, the emperor Claudius expelled all Jewish people from Rome.[2]

Suetonius (ca. 69–130/140), a Roman historian, wrote, “He banished from Rome all the Jews, who were continually making disturbances at the instigation of one Chrestus.”[3]

Most likely, this refers to the preaching of the gospel by Jewish believers.[4]

As a result, the church became composed entirely of Gentiles until the automatic repeal of the edict upon Claudius’s death in AD 54 (Cf. Acts 18:2; Rom 16:3).[5]

Paul appears to have written his letter within five years after the exile ended.[6]

By belonging to a foreign religion, Roman authorities considered Christians subversive to the social order.[7]

Therefore, Paul called his readers to practice good citizenship. Morally laudable behavior not only frees us from fear of punishment, it brings us approval from secular leaders.[8]

For example, in Greco-Roman households, no one held men and slave owners accountable for their treatment of women and slaves.[9]

As a result, Christian women and slaves received more freedom and power than their non-Christian friends enjoyed.[11]

In the early church, Christianity spread faster among women than among men. After all, males had more to lose in terms of their social status by converting to a despised minority religion.

The discrepancy in numbers was so great that Celsus, a 2nd century AD philosopher, complained, “[Christians] desire and are able to gain over only the silly, and the mean, and the stupid, with women and children.”[12]

The obedience expected of wives in Greco-Roman antiquity included allegiance to their husbands’ religions,[13] as Plutarch (46–122 AD) wrote in Advice to a Bride and Groom:

A wife ought not to make friends of her own, but to enjoy her husband’s friends in common with him. The gods are the first and most important friends.

Wherefore it is becoming for a wife to worship and to know only the gods that her husband believes in, and to shut the front door tight upon all queer rituals and outlandish superstitions.

For with no god do stealthy and secret rites performed by a woman find any favor.[14]

People in Greco-Roman society regarded most Christian women as highly insubordinate solely by their religious commitment.[15]

Only by leading exemplary lives could believers counter the appearance of undermining the social order.[16]

Aristotle’s 4th century BC view on government and household rule remained in effect in Paul’s era:[17]

Under each of these forms of government we find friendship existing between ruler and ruled, to the same extent as justice. The friendship of a king for his subjects is one of superiority in beneficence; for a king does good to his subjects, inasmuch as being good he studies to promote their welfare, as a shepherd studies the welfare of his sheep…

The friendship between husband and wife again is the same as that which prevails between rulers and subjects in an aristocracy; for it is in proportion to excellence, and the better party receives the larger share [of good], whilst each party receives what is appropriate to each…

All these instruments it is true are benefited by the persons who use them, but there can be no friendship, nor justice, towards inanimate things; indeed not even towards a horse or an ox, nor yet towards a slave as slave. For master and slave have nothing in common: a slave is a living tool, just as a tool is an inanimate slave.

Therefore, there can be no friendship with a slave as slave, though there can be as human being: for there seems to be some room for justice in the relations of every human being with every other that is capable of participating in law and contract, and hence friendship also is possible with everyone so far as he is a human being.

Hence even in tyrannies there is but little scope for friendship and justice between ruler and subjects; but there is most room for them in democracies, where the citizens being equal have many things in common.[18]

Under the best of circumstances, Aristotle compared a king’s subjects, women, and slaves to a farmer’s animals in relation to those who ruled over them.

When considering authority figures, Paul advised, “Do good and you will have approval from them.”

This aligned with typical Greek philosophy.[19]

Throughout our entire treatise our practice has been to employ the customary freedom of speech enjoyed by history, and we have added just praise of good men for their fair deeds and meted out just censure upon bad men whenever they did wrong.

By this means…we shall lead men whose nature fortunately inclines them to virtue undertake, because of the immortality fame accords them, the fairest deeds, whereas by appropriate [criticisms] we shall turn men of the opposite character from their impulse to evil.[20]

Claiming to know Christ while living disgracefully dishonors him.[21] Paul exhorted his readers to live for the glory of God in a world of sinful people.

Read Rom 13:3. Why did Greco-Romans consider Christians subversive? How did Paul seek to allay that tension? What do good governments do?

[17]Cohick, Women in the World of the Earliest Christians, 67.

[21]Cranfield, A Critical and Exegetical Commentary on the Epistle to the Romans, 2:646.