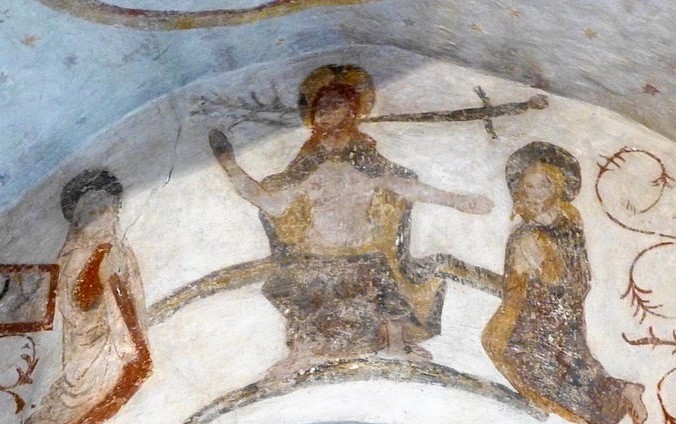 b) Rom 12:19: Paul recognized that sometimes even our best efforts to create a peaceful relationship result in failure (Rom 12:17–18).[1]

Therefore, he commanded, “Not yourselves taking revenge, beloved, but giving a place for the wrath [of God], as it is written, ‘Mine [is] vengeance. I will repay’ says the Lord.”

Many commentators believe that Paul inserted the word “beloved” (agapētos) because he recognized the difficulty of what he exhorted Christians in Rome to do.[2]

Nevertheless, those who seek vengeance trespass into activity which God reserves for himself.[3]

A major difference exists between the Old Testament (OT) and the New Testament concerning vengeance. The OT limits the injunction against taking revenge to fellow Jewish people (Lev 19:18; 2 Chron 28:8–15; Prov 24:28–29).[5]

For Christians, knowing what Jesus did for us when we were still his enemies enables us to refrain from taking matters into our own hands (Rom 5:6–9; Luke 6:27–37).[6]

We must, therefore, refrain from anger, whether he who provokes us be on a level with ourselves, or above us, or below us. A contest with one’s equal is of uncertain issue, with one’s superior is folly, and with one’s inferior is contemptible.

It is the part of a mean and wretched man to turn and bite one’s biter: even mice and ants show their teeth if you put your hand to them, and all feeble creatures think that they are hurt if they are touched.

It will make us milder tempered to call to mind any services which he with whom we are angry may have done us, and to let his deserts balance his offense.

Let us also reflect, how much credit the tale of our forgiveness will confer upon us, how many men may be made into valuable friends by forgiveness…

He who refuses to pardon, how often has he begged it for himself?

…If anyone is angry with you, meet his anger by returning benefits for it. A quarrel which is only taken up on one side falls to the ground. It takes two men to fight.[7]

Paul grounded his rationale for not taking revenge in the beginning of Deut 32:35,[8] where the Hebrew text says, “To me [is] vengeance and recompense.” Evidently, he cited the same Aramaic translation utilized by the author of Heb 10:30.[9]

Concerning revenge, the Jewish apocryphal work the Testament of Gad (second century BC) says, “And if he be shameless and persist in his wrong-doing, even so forgive him from the heart, and leave to God the avenging.”[12]

The Essenes of Qumran concurred:

I will pay to no man the reward of evil. I will pursue him with goodness. For judgement of all the living is with God and it is he who will render to man his reward…my soul shall not desire the riches of violence.

I will not grapple with the men of perdition until the Day of Revenge, but my wrath shall not turn from the men of falsehood and I will not rejoice until judgment is made.[13]

Read Rom 12:19. Why does the Lord command us to leave revenge to him? How can you practice that in a situation you currently face?

[1]Seifrid, “Romans,” Commentary on the New Testament Use of the Old Testament, 680.

[6]Cranfield, A Critical and Exegetical Commentary on the Epistle to the Romans, 648.

[7]L. Annaeus Seneca, “Of Anger,” in Minor Dialogs Together with the Dialog “On Clemency” (trans. Aubrey Stewart; London: George Bell and Sons, 1900), 34, Https://en.wikisource.org/wiki/Of_Anger/Book_II#XXXIV.

[8]Cranfield, A Critical and Exegetical Commentary on the Epistle to the Romans, 2:646–7.

[9]Seifrid, “Romans,” Commentary on the New Testament Use of the Old Testament, 680.

[10]Keener, IVPBBCNT, Rom 12:19. Since the ending of a Greek verb includes the first, second or third person, adding a pronoun makes that pronoun emphatic. In this case, the text literally says, “I I will repay.”