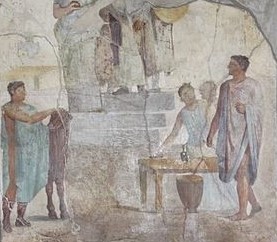 b) 2 Tim 3:5: Paul concluded his vice list in 2 Tim 3:1–5 by describing the false teachers as “having a form of godliness but its power having denied.”

These leaders maintained a mask as a protective shell.[1] This gave them an external appearance of piety without the inner renewal of the Holy Spirit.[2]

In Paul’s letters to Timothy and Titus, “godliness” (eusebeia) refers to a specific way of living which derives from belief in the gospel (Cf. 1 Tim 3:16; Tit 1:1). Reverent conduct results from that confession.[3]

Amazingly—despite their vices—these people exhibited a pretense of piety.[5] They likely enjoyed religious discussions and practices, assuming their righteousness because they engaged in asceticism and sacred rituals (1 Tim 4:1–7).[6]

The Jewish philosopher Philo (20 BC–40 AD) described certain people who claimed to believe the entire universe belongs to God.

He wrote, “These are the doctrines, not of men who are halting between two opinions, but of those who are occupied in a firm and sure faith; since, even now, there are some persons among those who make a show and pretense of piety.”[9]

Our proclamation of the gospel and lives transformed by the Holy Spirit to conduct ourselves in obedience to God’s commands mark true believers. A close connection exists between right thinking and right living.[11]

When people’s behavior fails to match their words, how they act reveals what they truly believe.

By rejecting the power of godliness in the past, the false teachers remained estranged from the Lord (2 Tim 2:12).[12] Their sinful behavior revealed the truth concerning the nature of their faith (Matt 7:15–23).[13]

Lacking the presence of the Holy Spirit, they possessed counterfeit spirituality (1 Cor 4:20).[14]

After detailing the attitudes and behaviors of false teachers in his vice list, Paul affirmed that he and Timothy lived in the end times.[15]

Once again, Paul used a term which appears only here in the New Testament.[17] Fortunately, Greco-Roman sources shed light on its meaning.

When describing the destruction of a city, Josephus (37–100 AD) wrote, “In hopes of Titus’ giving them his right hand for their security, and out of a consciousness that they had not given any consent to the war, they avoided (apotrepō) fighting.”[18]

An apocryphal book captures another nuance of the term, asking, “How is it that when we are attracted by foods that we aren’t allowed to eat, we can walk away from (apotrepō) the pleasure that we would get from them?” (4 Macc 1:33, CEB).

Consequently, in this passage Paul repeated his commands to Timothy to deliberately turn away from associating with false teachers (1 Tim 6:20–21; 2 Tim 2:16–18).[19] This charge confirms that the unbelievers he described associated themselves with the church of Ephesus.[20]

Earlier in his ministry, Paul commanded that the church in Corinth hand such people into Satan’s sphere of influence (1 Cor 5:9–13). They likely accomplished this by banning them from worship and especially from participating in the Lord’s Supper.[21]

Sadly, that such imposters infiltrate our churches no longer seems surprising.[23]

Psychopathic people often present themselves as intelligent, attractive, and trustworthy. Yet they possess no moral core. While swearing to remain forever true, they produce chaos in the lives of others with no sense of guilt.[24]

Christians tend to be easy prey, for we often have a false sense of security that those within our congregations are honorable and reliable. Thus, we must take proper precautions to protect the vulnerable among us, remaining ever on guard (Matt 18:1–6).[25]

Read 2 Tim 3:1–5. How would you describe the type of people Paul depicted? What makes them so dangerous? How can you protect yourself and your church from them?

Go to Introduction to Chapter 6

[12]Towner, The Letters to Timothy and Titus, 560. In Greek grammar, the perfect tense indicates that an action has occurred in the past with effects which continue to the present time.

[16]The word “such” (toutous) occurs in the masculine plural form, which can apply to only men or to a group of men and women.