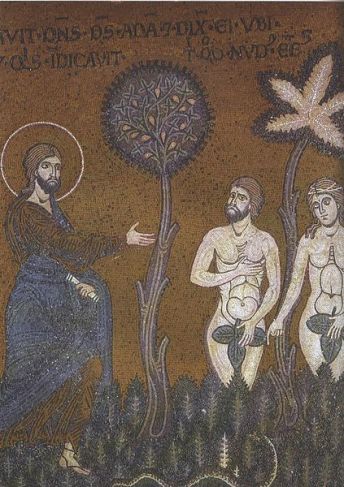 This is from the view of a Hebrew slave who was freed from Egypt.

After Moses told us about the creation of the universe from God’s point of view, he started again. He told the creation story as Adam saw it (Gen 2:4–25).

God put all kinds of plants with wonderful fruit into a mountaintop garden-temple. Four streams flowed in different directions to water it.

Then, he made Adam from the ground and breathed life into him.

The Lord gave Adam the job of a priest: serving, caring for, and protecting the garden-temple.

Adam could eat from any tree he wanted, except for one. God said, “From all of the trees of the garden you are able to eat, but from the tree of the knowledge of good and evil, you shall not eat, because in the day you eat it, you shall surely die.”

While Adam acted as God’s representative by naming the animals, he saw that each animal had its mate.

Yet, he was alone.

God knew the man needed an equal partner to save him from being alone. So, the Lord put the man into a deep sleep and made a woman from his side.

When Adam woke up, he yelled with joy, making a covenant.

She was a female version of himself.

The man and woman lived in loving harmony and without shame, even though they were naked. All was the very best it could be (Gen 1:31).

Meanwhile, the serpent wanted to stop God’s kingdom from expanding through the work of humanity (Gen 3:1–24).

That didn’t surprise me: everyone in Egypt knows about evil serpents:

Before God freed us, we thought that night came when the ship of the sun god Ra moved through the skies of the underworld and the serpent Apep swallowed the sun. Ra’s priests still cast spells every night to help Ra beat Apep and stop the serpent from destroying Egypt.[2]

In Eden, the snake went to the man and the woman. He found them together. However, the serpent spoke to the woman.

She was made after God told the man not to eat from the tree of the knowledge of good and evil. By changing God’s words, the serpent tricked her into eating the fruit.

The woman gave some to her husband and he ate it.

Their eyes opened, and for the first time, they saw they were naked! Ashamed, they covered themselves with leaves.

God knew what they did and came down in the wind of a storm to speak with them.

The couple heard him coming and hid.

Adam blamed his wife and then the Lord for creating her. She said that the serpent tricked her.

So, sin destroyed the harmony between God and people, between men and women, and between people and animals.

God spoke to the serpent first. What he said reminded me of Ra’s priests when they curse Apep.

They say, “Get thee back, Apep, thou enemy of Ra, thou winding serpent in the form of an intestine, without arms [and] without legs. Thy body cannot stand upright so that thou may…have…being, long is [thy] tail in front of thy den, thou enemy; retreat before Ra. Thy head shall be cut off, and the slaughter of thee shall be carried out. Thou shalt not lift up thy face, for [Ra’s] flame is in thy accursed soul.[3]

God did the same thing and even said the serpent would be destroyed and “eat dust.”

This would happen when the serpent and his “offspring”—people who rebel against God—fought against God’s people, the “offspring of the woman” (Matt 12:34; Matt 23:33; John 8:44).

Moses spoke about that struggle in the rest of Genesis.

He then asked us, “Whose offspring are you?”

Someday, the serpent and a hero from the offspring of the woman will fight one-on-one.

In one motion, the poisonous serpent will strike his heel and God’s man will strike the serpent’s head. Both will die.

Then, God spoke to the woman.

Since she ate the fruit, the arrival of her offspring would cause her agony, through the whole process of carrying a child in her womb to giving birth.

She would long for the closeness and equality she once had with her husband. Instead, Adam would rule over her.

The Lord spoke to Adam last.

God cursed the ground to make it dry and unfruitful. Working hard to get every meal reminded Adam of his sin.

Finally, Adam would return to the ground in death.

Later, Adam named his wife as a sign of his new rule over her and to renew their marriage agreement.

By calling her “Eve”—which means “the mother of all the living”—Adam spoke in faith that God’s promise of children would happen.

We know the Hittite Law that says, “If a mother draws her garment away from a son of hers, she is repudiating her sons,”[4] claiming they are no longer hers.

By putting clothes on Adam and Eve, the Lord was saying that they were still his people. He was not giving up on them.

Instead, he would make another covenant with humanity.

Clothing also protected them when they worked the ground which the Lord had cursed.

By eating from the tree of the knowledge of good and evil, the former priests of Eden could not stay there.

To keep Adam and Eve from eating from the tree of life and living forever in their sin, God drove them out of the only home they had ever known.

He placed new protectors at the entrance to the garden: a pair of angels and “the flame of a sword turning this way and that” (Ezek 1:4–14 describes cherubim).

I know that I was born outside of Eden. My natural desires and thoughts prove I don’t belong there.

Discuss how you can apply what you have learned here to your life and ministry.

Image via Wikimedia Commons This mosaic of God with Adam and Eve after they sinned dates from the twelfth century AD.

Return to Chapter 5: An Early Israelite View of Genesis

[3]Budge, Legends of the Gods: The Egyptian Texts, 76, https://archive.org/details/pdfy-xdlRmtA_vlvJ9uLy/page/n77.