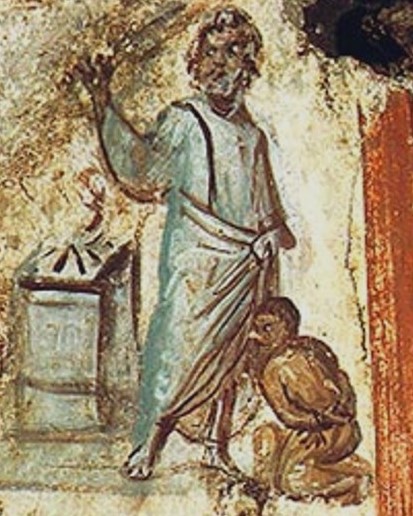 This is from the view of a Hebrew slave freed from Egypt.

The last time Moses talked about Abraham, he and Sarah had just learned that she would have a baby. She was ninety years old!

Abraham had also gotten the Lord to agree not to destroy the city of Sodom if he found ten righteous people there. That was down from fifty people (Gen 18).

Knowing myself, it’s easy to be very happy about a victory in life and then commit a great sin. It is also easy to commit the same sins more than once.

Even after he lied to the pharaoh and let him take Sarah for a wife, Abraham’s fear caused him to tell the people living in the desert that Sarah was his sister.

So, King Abimelech took Sarah for a wife.

Since he was an innocent man, God came to him in a dream and said, “You are as good as dead because of this woman you have taken. She is a married woman.”

The king was very afraid. He told the Lord that he hadn’t touched Sarah and that Abraham tricked him.

God said that he knew Abimelech had done nothing wrong. That was why he stopped him from sinning by having sex with a married woman.

The Lord said to return Sarah and have Abraham pray for him or Abimelech would die.

Abimelech was angry. He asked Abraham why he lied to him.

Abraham said he thought no one in Abimelech’s country cared what God thinks.

He also said that Sarah really was his sister, and that he asked her to show she loved him by telling that to people in other nations.

To show that nothing wrong had happened between him and Sarah, Abimelech gave Abraham sheep, cattle, slaves, and twenty-five pounds (11.3 kilos) of silver.

He told Abraham that he could live wherever he wanted in Abimelech’s country.

After Abraham prayed for Abimelech, his wife and slaves were able to have children again.

Later, Abimelech asked Abraham to make a formal agreement not to lie to him or his offspring (Gen 21:22–24).

I am amazed that a king in Canaan would do what God says is right!

She gave birth to Isaac, whose name means “he laughs.” Sarah laughed with joy after he was born.

Abraham circumcised Isaac when he was eight days old.

When Isaac stopped drinking his mother’s milk, Abraham and Sarah had a great feast to celebrate.

Ishmael, Abraham’s teenage son through Hagar, made fun of Isaac. He did something like pretend to drink from his mother.

Sarah was very angry. She demanded that Abraham get rid of Hagar and Ishmael.

Since Hagar had been given to Abraham as a wife, Sarah told him to send her away by divorcing her, and to take away Ishmael’s rights as Abraham’s firstborn son.

This upset Abraham very much.

Then, God told him, “All which Sarah tells you, obey her, because Isaac will be called your offspring, and I will also make the son of the slave a nation because he is your offspring” (Gen 21:1–13).

So, Abraham obeyed his wife.

Early the next day, he gave Hagar some food and water and sent her and Ishmael into the desert.

After they ran out of water, Hagar left her son under a bush. She moved away so she would not have to watch him die.

God heard Ishmael crying, and he called from heaven to Hagar.

The Lord told her not to be afraid; he would make a great nation from her son. He showed her where to find water for their trip.

One day, God said to Abraham, “Take your son, your only [son], whom you love, Isaac, and go to the land of Moriah and offer him there for a whole burnt offering upon one of the mountains which I will tell you.”

Can you imagine what Abraham was thinking about while trying to sleep that night?

How could God keep his promise of too many offspring to count through Isaac if he killed him (Gen 17:19)?

He had already sent Ishmael away. Would he go back to not having a child of his own, or would the Lord bring Isaac back from death?

How could he kill his own son?

What would Sarah do when she learned what he had done?

Early the next morning, Abraham and Isaac left for the place where God told Abraham to go. On the third day, they got there.

Abraham took the wood from the donkey and gave it to Isaac to carry. He told his servants that he and Isaac would go to worship God and then return to them.

Isaac saw that they had the wood, the fire, and the knife—but no animal—to sacrifice. Abraham told him, “God will choose for himself the lamb for a sacrifice.”

When they arrived, Abraham built an altar and put the wood on it. Then, he grabbed Isaac, tied him up, and laid him on top of the wood.

Abraham was about to kill his son when the Angel of the Lord called him to stop.

He told Abraham that he now knew that Abraham feared God even more than he loved his son.

Abraham looked up and saw a male sheep with its horns stuck in a bush. Instead of Isaac, he sacrificed the animal which God gave him.

Abraham called that place The Lord Will Provide.

God again promised to bless Abraham with so many offspring that no one could count them. His offspring would take the cities of their enemies.

Many years later, Sarah died in Canaan at the age of 127.

Abraham found the perfect place for a family tomb: a nearby cave.

He wanted to put Sarah’s body there on a rock shelf. When another person in the family died, they could move her bones farther into the cave to make room for the new person.

Ephron, the owner of the cave, said he would give it to Abraham for free. That meant that Ephron could take it back whenever he needed it.

Abraham did not want that to happen, so he said he wanted to pay for it.

When Ephron named the price for his field and the cave, Abraham didn’t even bargain. He just paid him the ten pounds (4.6 kilos) of silver.

This was the first land any of the Hebrews owned in Canaan (Gen 23).

Abraham did not want Isaac to marry one of the Canaanite women who lived near them.

Instead, he sent a servant he trusted to go back to his home country to find a wife for Isaac from his own relatives.

Abraham knew that the Lord would send an angel with his servant.

When the servant came to that town, he asked God to help him to know who he should ask.

The man prayed that God would show him a woman who cared about people and their animals.

He would know her by asking for a drink for only himself, but she would give water to him and to his camels. God answered his prayer when Rebekah did that.

She made as many as one hundred trips to the well with her water jar to give each camel enough water (Gen 24:1–21).

Once the servant knew she was the right woman, he gave Rebekah three pieces of gold jewelry.

Then, he asked who her father was, and if they had a place for him to stay that night. She was one of Abraham’s relatives!

The servant bowed down and worshiped God, thanking him for taking him to the right place.

Rebekah ran home to tell her family what happened.

As soon as her brother Laban saw the gold jewelry, he ran to meet Abraham’s servant and asked him to stay with them.

After taking care of the camels, everyone sat down to eat. Abraham’s servant didn’t want to wait to tell them why he came.

He told them about Abraham’s wealth, and that he wanted to find a good wife for Isaac. Then, he talked about his prayer to find the right woman (Gen 24:22–49).

Laban and his father said they could tell that God wanted Rebekah to marry Isaac. They wanted her to marry him too.

The next morning, he asked to leave with Rebekah that day, instead of waiting ten days. Her family asked Rebekah, and she agreed to go with him without waiting.

As they were leaving, they blessed Rebekah, asking that she have too many offspring to count, and that those offspring would defeat their enemies (Gen 24:50–61).

Isaac was in a field when he saw the camels coming home.

As soon as Rebekah knew her new husband was coming to see them, she put on her veil.

That is what a married woman with a high social rank does: she goes out in public with a veil covering her head.[1]

Abraham married another woman, named Keturah. They had six children together.

One of them was the ancestor of the Midianites. Moses’s wife came from that nation (Exod 2:15–21).

Since Abraham gave gifts to Keturah’s sons and sent them away, we can tell that she was a concubine, someone who did not have the full rights of a wife.

Isaac, the son of Sarah, got everything Abraham still owned when he died at the age of 175 years.

Ishmael and Isaac met to bury Abraham together in the cave with Sarah’s bones (Gen 25:1–10).

Discuss how you can apply what you have learned here to your life and ministry.

Image via Wikimedia Commons This was painted in 320 AD in a tomb in Rome.

Return to Chapter 5: An Early Israelite View of Genesis