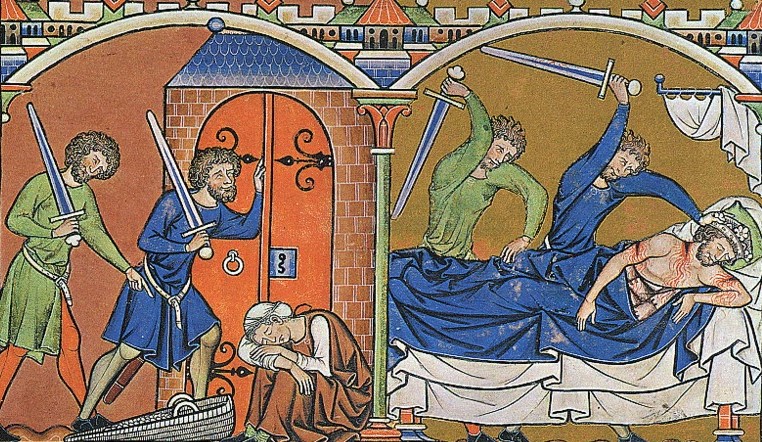 c) Gen 9:5–7: In the Lord’s covenant with Noah, people could shed the blood of an animal for sacrifice or in the process of obtaining food (Gen 8:20–9:4). However, God declared human blood off-limits.[1]

Within this short passage, the Lord mentioned bringing someone to account for taking human life three times (Cf. Ps 9:12).[2] He condemned even animals who kill people to death (Exod 21:28–32).

Although God had not demanded the life of Cain for killing his brother (Gen 4:8–11), beginning after the flood murderers would pay with their lives.[3]

The Lord made provision for six cities of refuge in Israel for those who accidentally killed another person. Yet, even in such cases, the guilty party could not leave the city safely until the death of the high priest (Num 35:9–34).

Note the chiasm embedded in this verse:

A Whoever pours out

C of a person

Ć by a person

The law of retaliation (lex talionis) ensured repayment of the guilty party without excessive punishment.[6]

In the case of murder, the just penalty is death. In ancient Israel, a close relative of the one murdered acted as the executioner.[7] However, by the time of the Greco-Roman Empire, the government assumed this function (1 Pet 2:13–14).[8]

Until recently, many scholars viewed the law of retaliation as a vestige of a barbaric culture.[9]

According to the Mosaic law, if a person among the elite of society killed his slave, that slave would be avenged (naqam) (Exod 21:18–26).

In contrast, the earliest Akkadian law code, the Laws of Eshnunna (ca. 18th century BC), states:

If a man has no claim against a(nother) man, but (nevertheless) distrains (seizes) the (other) man’s slave-girl, detains the distrainee in his house and causes (her) death, he shall give two slave-girls to the owner of the slave-girl as a replacement.

If he has no claim against him, but (nevertheless) distrains the wife of a muškēnum  (palace official) (or) the child of a muškēnum and causes (their) death, it is a capital offense. The distrainer who distrained shall die.[10]

In Akkad at that time, the death penalty applied only for offenses against the gods or those associated with royalty.[11]

Among extant Ancient Near Eastern (ANE) law codes, the 18th century BC Code of Hammurabi first established the law of retribution. Yet even there, the social class of the person killed determined the penalty:[12]

If a seignior (free man) held (a debt of) grain or money against a(nother) seignior and distrained (someone as) his pledge and the pledge has then died a natural death in the house of his distrainer, that case is not subject to claim.

If a seignior struck a(nother) seignior’s daughter and has caused her to have a miscarriage, he shall pay ten shekels of silver for her fetus. If that woman has died, they shall put his daughter to death.

Contrary to these ancient law codes, the text in Gen 9:6 indicates that money cannot recompense murder regardless of a person’s social class.[14] Nor can someone put the child of a killer to death (Deut 24:16).[15]

Consequently, the biblical law of retribution represents an important advancement in the ANE judicial system.[16]

The Lord decreed the death penalty in the case of murder because, “in the image of God he made humanity” (Gen 1:26–27). Even after the fall, we continue to retain our status as divine image-bearers (Gen 5:1–3).[17]

A murderer kills someone who resembles God.[18]

Among believers, this alone should suffice to prevent us from engaging in violent activity.[19] No sin exhibits greater disdain for human life than murder.[20]

This explains why humanity continues to enjoy the unique status which the animal kingdom does not.[21] Despite our expulsion from paradise (Gen 3:22–24), sin does not completely mar our likeness to the Lord.[22]

Echoing the mandates to the sea creatures and to all the animals (Gen 1:20; Gen 8:17),[24] the Lord commanded Noah and his sons, “And you, be fruitful, and multiply, and swarm on the earth, and multiply on it.”

God called Noah and his descendants to produce life, not to wantonly take it.[25]

Read Gen 9:5–7. According to the Old Testament, who should suffer the death penalty for killing a person? How does the biblical text differ from other ANE documents in this regard? What sets people apart from animals? How does the Lord regard life?

[17]Williamson, Sealed with an Oath: Covenant in God’s Unfolding Purpose, 64.

[23]Williamson, Sealed with an Oath: Covenant in God’s Unfolding Purpose, 64.