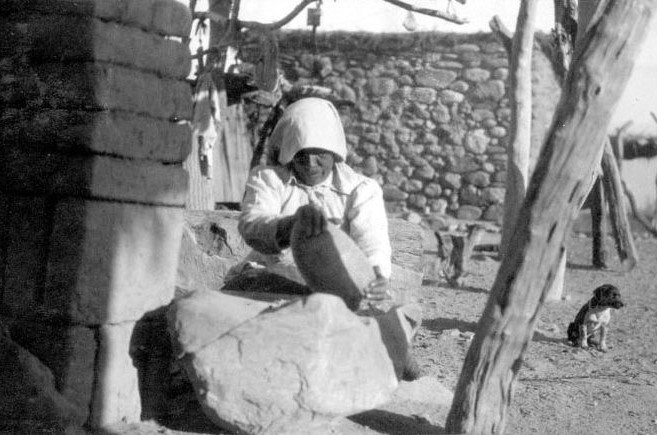 Men routinely worked in a field and women ground grain, without any sense of threat.[3] In fact, women in small households considered milling flour a form of drudgery.[4]

Families typically shared a courtyard and large grinding stones with their neighbors, possibly their relatives.[5]

Just as a lit lamp indicated someone at home in the evening, so the sound of millstones revealed the presence of a woman (Jer 25:10–11; Rev 18:21–23). Grinding comprised a daily chore.[6]

The Mishnah regulated this activity:

One woman may lend to another who is suspected [not to observe properly the laws] of the Sabbatical year, a flour-sieve, a winnow, a handmill, and a stove, but she may not assist her to winnow or to grind.

The wife of [one learned in, and observant of, the law] may lend to the wife of an unlearned person, a flour-sieve or a winnow, and may aid her to winnow, to grind, or to sift; but as soon as water is poured over the flour, she may not further assist her, for those who transgress the law are not to be aided in their transgressions (m. Gittim 5.9).

Women of varying religious commitments could grind grain together. In Jesus’s scenario, one of the two had prepared spiritually while the other had not. No middle ground exists (Matt 10:34–39).[7]

At some future time, people will go about their daily routines when—without warning—God will take some while leaving others. This raises intriguing questions. What determines who the Lord takes?[8] Is being taken a good or a bad thing?

As a result, neither the context nor the meaning of this pair of verbs produces a conclusive answer.

Consequently, New Testament scholars remain divided regarding who will be taken and who will be left.

Some assert that angels shall gather God’s people while leaving others on earth to face judgment (Matt 24:31).[13] They make a comparison with Noah and his family being gathered into the ark while those left outside perished.[14]

Other experts note that the nineteenth century concept of living believers being taken into heaven prior to judgment falling upon the earth rests upon shaky theological ground.[15]

In fact, a recent survey of Protestant pastors revealed that only one-third endorse a pre-tribulation rapture.[16]

The crucial text for those who believe that Christians shall avoid the coming tribulation is 2 Thess 2:1–7. They view “the one who restrains” (katechō) in v. 7 as the Holy Spirit within believers, a notion which some prominent commentators deride.[17]

Many scholars assert that Paul omitted the identity of the restrainer because the Christians in Thessalonica knew who it was.[18] Thus, any attempt to name that person or force consists of speculation.[19]

Several usages of “paralambanō” in the Greek Old Testament carry the nuance of being forcibly removed (Jer 49:2; Lam 3:2). Matthew chose this word to describe how the Roman soldiers took Jesus away to torture and mock him (Matt 27:27).

Taking people away into judgment fits with the threat rendered by the Roman army when they destroyed the temple (Matt 24:15–22).[22] It also meshes with the flood sweeping away the wicked (Matt 24:39).[23]

Finally, the parallel passage in Luke implies that the ones taken will face judgment (Luke 17:34–37).[24]

Earlier in Matthew’s gospel, Jesus delivered several parables on the subject of the judgment to come.

Read Matt 24:40–41. How do the two women grinding and the two men in the field each differ from the other? Why do you think Jesus chose activities like farming and grinding grain for this parable? Who do you think will be taken? Why?

[1]Blomberg, “Matthew,” in Commentary on the New Testament Use of the Old Testament, 88.

[5]Keener, The Gospel of Matthew: A Socio-Rhetorical Commentary, 591.

[19]Charles A. Wanamaker, The Epistles to the Thessalonians: A Commentary on the Greek Text (NIGTC; Grand Rapids: Eerdmans, 1990), 256.