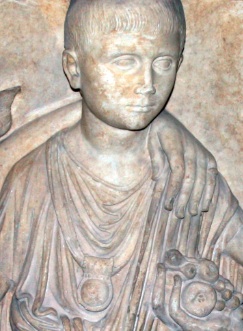 c) Eph 6:4: In a society where men wielded life-long power over whether their children lived or died, Paul recognized that fathers needed instruction concerning behavior toward their children.[1]

Such reciprocity in household codes was unheard of in the Greco-Roman milieu. Typically, they regulated the behavior of women, children, and slaves toward husbands, parents, and masters.[3]

The apostle wrote, “And fathers, do not provoke to anger your children but nurture them in the training and instruction of the Lord.”

However, in Greco-Roman society, the training and instruction of children remained their father’s responsibility, which is likely why he mentions only men here.[5]

In contrast, Paul employed the generic word for “parent” (goneus) in Eph 6:1.[6]

Paul also employed the related noun parorgismos in Eph 4:26, which is the only time it occurs in the NT.[8]

Yet, his meaning remains clear. Fathers must evaluate the effect of their words and deeds upon their children before interacting with them (Col 3:21).[9]

Men must practice consideration and sensitivity to their children’s feelings (Eph 4:29–32).[12]

Since fathers in the Greco-Roman world reigned supreme, people assumed they would treat their children harshly.[13]

In fact, the original recipients of this letter likely expected Paul to command juveniles to not provoke their parents. No comparable admonition exists in Greco-Roman literature.[14]

Although Greco-Romans universally viewed children as the property of their parents—as noted in Obedience in the Lord (Eph 6:1)—a few authors did recommend moderation in raising them.[15]

It is, I assure you, of the greatest service to boys that they should be soundly brought up, yet to regulate their education is difficult, because it is our duty to be careful neither to cherish a habit of anger in them, nor to blunt the edge of their spirit…

A boy’s spirit is increased by freedom and depressed by slavery: it rises when praised and is led to conceive great expectations of itself: yet this same treatment produces arrogance and quickness of temper: we must therefore guide him between these two extremes, using the curb at one time and the spur at another.

He must undergo no servile or degrading treatment; he never must beg abjectly for anything, nor must he gain anything by begging; let him rather receive it for his own sake, for his past good behavior, or for his promises of future good conduct.

In contests with his comrades we ought not to allow him to become sulky or fly into a passion…we should allow him to enjoy his victory, but not to rush into transports of delight: for joy leads to exultation, and exultation leads to swaggering and excessive self-esteem.

We ought to allow him some relaxation, yet not yield him up to laziness and sloth, and we ought to keep him far beyond the reach of luxury, for nothing makes children more prone to anger than a soft and fond bringing-up, so that the more only children are indulged, and the more liberty is given to orphans, the more they are corrupted.

He to whom nothing is ever denied, will not be able to endure a rebuff, whose anxious mother always wipes away his tears, whose [servant who escorts him to school] is made to pay for his short-comings. Do you not observe how a man’s anger becomes more violent as he rises in station?…

Flattery, then, must be kept well out of the way of children. Let a child hear the truth, and sometimes fear it: let him always reverence it. Let him rise in the presence of his elders.

Let him obtain nothing by flying into a passion: let him be given when he is quiet what was refused him when he cried for it: let him behold, but not make use of his father’s wealth: let him be reproved for what he does wrong…

Above all, let his food be scanty, his dress not costly, and of the same fashion as that of his comrades: if you begin by putting him on a level with many others, he will not be angry when someone is compared with him.[16]

The verb which Paul chose as the standard for child-rearing (ektrēphō) contains two shades of meaning. On the one hand, it refers simply to “bringing up” a child. It also refers to nurturing and feeding someone (Eph 5:29; Gen 47:17).[17]

Lycurgus would not put the sons of Spartans in charge of purchased or hired tutors, nor was it lawful for every father to rear or train his son as he pleased, but as soon as they were seven years old, Lycurgus ordered them all to be taken by the state and enrolled in companies, where they were put under the same discipline and nurture (ektrēphō) and so became accustomed to share one another’s sports and studies.[18]

Nurturing involves more than simply bringing someone up to adulthood.[19]

Similarly, nouthesia means “counsel about avoidance or cessation of an improper course of conduct.”[23]

It involves verbal admonition,[24] with the goal of redirecting a person’s mind onto the right course of action.[25]

By the Greco-Roman era, once a boy reached seven years of age, the primary influence upon him officially shifted from his mother to his father.[27] Often, his parents hired a tutor.[28]

In terms of basic education, women in Rome and in Asia Minor—where Ephesus is located—fared better than those in Judea or Greece.[30]

Nevertheless, the rationale for educating Greco-Roman women appeared to be so that they could teach young boys.[31]

I would, therefore, have a father conceive the highest hopes of his son from the moment of his birth. If he does so, he will be more careful about the groundwork of his education…

Above all see that the child’s nurse speaks correctly…Do not therefore allow the boy to become accustomed even in infancy to a style of speech which he will subsequently have to unlearn…   As regards parents, I should like to see them as highly educated as possible, and I do not restrict this remark to fathers alone…

And even those who have not had the fortune to receive a good education should not for that reason devote less care to their son’s education.[32]

However, Greco-Roman people frequently denounced highly-educated women as promiscuous. In their society, a woman with a bold demeanor implied sexual availability.[33]

In 115 AD, Juvenal satirized educated women by writing the following:

There’s worse yet, the woman I mean who…starts praising Virgil, forgives the failing Dido, pits the poets against each other, and compares them…

The literary men concede, the rhetoricians are beaten, the whole party is silent…such powerful utterance falls from her lips, you might say it’s like the sound of dishes being struck, or peals of bells…

So, let the lady reclining next to you, not indulge in her own style of rhetoric, or revolve whole phrases before tangling you in some perverse argument, or know every event that occurred in history.

Let there be a few literary things she doesn’t understand. I loathe a woman who…always observes the laws and rules of speech, a woman learned in antiquities, who knows lines from the ancients unknown to me…

If she must appear so excessively learned and eloquent, she may as well be a man…

Nothing’s more intolerable than the sight of wealthy women.[34]

This was rare at that time within Judaism.[36]

While some rabbis taught that men should teach the Mosaic law to their daughters, others asserted that doing so amounted to debauchery (m. Sotah 3.4).

The Jerusalem Talmud went further, contending, “Let the words of the law be burned rather than committed to women” (y. Sotah 3:19).[37]

Finally, we have the modifying phrase “of the Lord” in Paul’s admonition to train and instruct children.

The law…commands us to bring those children up in learning, and to exercise them in the laws, and make them acquainted with the acts of their predecessors, in order to their imitation of them, and that they might be nourished up in the laws from their infancy, and might neither transgress them, nor have any pretense for their  ignorance of them.[39]

Plato (427–347 BC) recognized the value of modeling proper behavior.

He claimed, “The most effective way of training the young—as well as the older people themselves—is not by admonition, but by plainly practicing throughout one’s own life the admonitions which one gives to others.”[40]

Paul offered himself as an example worthy of emulation (1 Cor 4:14–17, 21). We, too, must educate our children with a godly demeanor, in addition to emphasizing Christian subject matter.[41]

[1]Witherington, The Letters to Philemon, the Colossians, and the Ephesians: A Socio-Rhetorical Commentary on the Captivity Epistles, 338.

[5]Witherington, The Letters to Philemon, the Colossians, and the Ephesians: A Socio-Rhetorical Commentary on the Captivity Epistles, 337.

[10]Witherington, The Letters to Philemon, the Colossians, and the Ephesians: A Socio-Rhetorical Commentary on the Captivity Epistles, 338.

[11]Witherington, The Letters to Philemon, the Colossians, and the Ephesians: A Socio-Rhetorical Commentary on the Captivity Epistles, 338.

[15]Witherington, The Letters to Philemon, the Colossians, and the Ephesians: A Socio-Rhetorical Commentary on the Captivity Epistles, 338.

[24]Witherington, The Letters to Philemon, the Colossians, and the Ephesians: A Socio-Rhetorical Commentary on the Captivity Epistles, 338.

[28]Witherington, The Letters to Philemon, the Colossians, and the Ephesians: A Socio-Rhetorical Commentary on the Captivity Epistles, 337.

[36]Witherington, The Letters to Philemon, the Colossians, and the Ephesians: A Socio-Rhetorical Commentary on the Captivity Epistles, 338.

[37]John Lightfoot, From the Talmud and Hebraica: A Commentary on the New Testament (Peabody, MA: Hendrickson, 1989), 580, Https://www.ccel.org/ccel/lightfoot/talmud.vii.iii.html.

[38]Bruce, The Epistles to the Colossians, to Philemon, and to the Ephesians, 398.

[41]Witherington, The Letters to Philemon, the Colossians, and the Ephesians: A Socio-Rhetorical Commentary on the Captivity Epistles, 338.