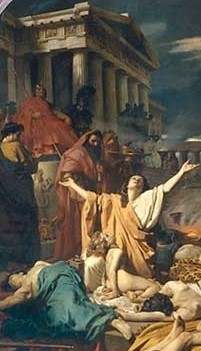 9) A great upheaval occurred in Israel during the Intertestamental Period, the time between when the final book of the Hebrew Bible was written (ca. 450 BC) and the birth of Christ (ca. 6–4 BC). After the death of Alexander the Great in 323 BC, Greek-speaking kings known as the Seleucids took control of Palestine until 64 BC.[1]

The priestly line of Zadok remained in control from David’s reign (ca. 1005–965 BC) until the rule of Antiochus IV.[2]

Antiochus, who called himself “manifest [as a god]” (Epiphanes) usurped the Seleucid throne in 175 BC and ruled until 164 BC. Due to his tyrannical unpredictability, his detractors called him “Epimanes,” which means “utterly mad.”[3]

A year after taking the throne, Antiochus IV sold the office of high priest to the highest bidder with a pro-Greek orientation,[4] first to the high priest’s brother and then to men with no relation to the office.[5] These included Menelaus, whom a Jewish historical book called “a cruel tyrant” (2 Maccabees 4:7–25).

After insurrectionists deposed Menelaus, Antiochus besieged Jerusalem and looted the temple (2 Macc 5:11–22). The king then forbade the observance of the Mosaic law, including circumcision and keeping the Sabbath. As a final insult, he desecrated the temple by sacrificing a pig to Zeus on the altar (2 Macc 6).

Refusing to participate in a pagan sacrifice, a warrior named Matthias and his five sons led the Maccabean Rebellion. This lasted seven years (167–160 BC), culminating in a declaration of peace from the king which Roman ambassadors confirmed (2 Macc 11:27–35).

The Festival of Dedication (Hanukkah) commemorates the re-consecration of the temple and its altar during this period (1 Macc 4:28–60; b. Shabbat 21b).[6] A few years later, the king’s successor, Antiochus V, reconquered Israel but permitted religious freedom.[7]

After years of military engagement and negotiations with Rome, Simon Maccabee established the independent Hasmonean Dynasty in 142 BC. Only two years later, he added the office of the high priest to his civil rule. Thus, the high priesthood accrued unprecedented power, becoming a highly-politicized office with both religious and civil authority.[8]

During this period, major parties and sects developed within Judaism.[9] Citizens concerned by the concentration of power asked the Roman general Pompey for help in 63 BC. Pompey responded by taking control, imposing Roman tribute, and enslaving many Israelites.[10]

He aligned himself with the aristocratic Jewish party called the Sadducees.[13] The Sadducees remained in control of the temple in Jerusalem until the Roman army destroyed it in 70 AD.[14]

Meanwhile, the Essene community condemned the Sadducees’ corruption and claimed that only their sect in Qumran upheld biblical tradition (1QH4).[15]

During this era the family of Annas attained prominence. Annas received his appointment as high priest in 6 AD, then his son-in-law Caiaphas (18–36 AD) began ruling three years after a Roman official deposed him. Overall, five of Annas’ sons held the office of high priest.[16]

In contrast to the Sadducees, in approximately 150 BC, the Pharisees created a lay movement which developed the view that members of God’s covenant people could be identified by their adherence to the Mishnah. This commentary on the five books attributed to Moses formed a hedge around the Mosaic law (m. Avot 1:1),[17] in violation of Deut 4:1–2 and Deut 12:32.

An easy example to remember consists of the Jewish prohibition upon eating a cheeseburger, which derives from the command, “You shall not cook a young goat in its mother’s milk (Exod 23:19).

Although the Pharisees did not descend from a priestly lineage, the members of this sect strictly maintained the Mishnah’s tradition of oral laws regarding purity, tithing, and the Sabbath intended for those serving in the temple.[18]

The Pharisees took great care to separate from the impure “people of the land” who failed to avoid contaminating themselves (Matt 9:10–11; Luke 7:36–39).[19]

They sought to practice Judaism in every area of life while remaining in their communities. Thus, they did not form an exclusive community, as the Essenes did in Qumran.[20]

However, like the Essenes, they believed the messiah would come to usher in the kingdom of God only when every Israelite fully obeyed all of the Mishnah’s interpretation of the law of Moses.[21]

Consequently, Jesus’s teachings and behavior enraged them (Cf. Matt 12:1–8; Mark 7:1–15). They concluded that Christ not only prevented Israel’s messiah from coming to rescue them, his popularity would result in more oppressive Roman domination (John 11:38–53).[22]

During this intertestamental era, which is also called the Second Temple period, the study of prophecies concerning the end times flourished. Religious Jews asserted that God already reigned as King.

Nevertheless, after centuries of foreign domination, they yearned for the coming of the messiah, the Lord’s anointed one who would save God’s people.[23]

They saw themselves as the persecuted elect, and ached for their vindication, when the Lord would judge the kingdoms of this world and reestablish paradise on earth.[24]

Why did the Maccabees rebel? What scandals engulfed the office of the high priest? How would you characterize the Sadducees? Why did rabbis write the Mishnah? What were the Pharisees trying to accomplish? Why did Jesus infuriate them?

Go to Exile in the CSER Structure Part 2

[Click here to return to CSER Table of Contents]