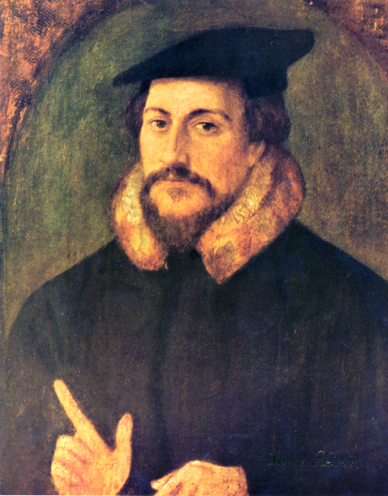 However, John Calvin disagreed with them and with the seventh century AD revision of the Apostles’ Creed.

After developing his own theory, he wrote, “Common has been the opinion that Christ’s descent into hell is here referred to; but the words mean no such thing; for there is no mention made of the soul of Christ, but only that he went by the Spirit.”[2]

Calvin envisioned the descent into hell as a graphic depiction of the torture endured by condemned souls which Christ bore on the cross (Matt 27:26–49; John 19:28–30), stating:[3]

Here we must not omit the descent to hell, which was of no little importance to the accomplishment of redemption. For although it is apparent from the writings of the ancient Fathers, that the clause which now stands in the [Apostles’] Creed was not formerly so much used in the churches, still…[it] ought not by any means to be disregarded…

To conclude from it that the souls of the dead are in prison is childish. And what occasion was there that the soul of Christ should go down thither to set them at liberty?

I readily admit that Christ illumined them by the power of his Spirit, enabling them to perceive that the grace of which they had only had a foretaste was then manifested to the world. And to this not improbably the passage of Peter may be applied…

Believers who had died before that time were partakers of the same grace with ourselves: for he celebrates the power of Christ’s death, in that he penetrated even to the dead, pious souls obtaining an immediate view of that visitation for which they had anxiously waited; while, on the other hand, the reprobate were more clearly convinced that they were completely excluded from salvation.[4]

What follows is attended with some difficulty; for [Peter] does not mention the faithful here, but only the unbelieving; and this seems to overturn the preceding exposition.

Some have for this reason been led to think…the unbelieving, who had formerly persecuted the godly, found the Spirit of Christ an accuser, as though Peter consoled the faithful with this argument, that Christ, even when dead, punished them.

But their mistake is discovered by what we shall see in the next chapter [1 Pet 4:6], that the Gospel was preached to the dead, that they might live according to God in the spirit, which… applies to the faithful.[5]

In addition, Calvin believed that the “prison” consisted of a watch-tower for the protection of the Old Testament saints. They waited for Christ to release them by proclaiming their redemption.[6] In this scenario, Jesus liberated them sometime between his death and resurrection.[7]

Peter speaks generally, that the manifestation of Christ’s grace was made to godly spirits, and that they were thus endued with the vital power of the Spirit…It seems to me…that godly souls were watching in hope of the salvation promised them, as though they saw it afar off…

But if the word prison be preferred, it would not be unsuitable; for, as while they lived, the law, according to Paul (Gal 3:23), was a sort of prison in which they were kept; so after death they must have felt the same desire for Christ; for the spirit of liberty had not as yet been fully given. Hence this anxiety of expectation was to them a kind of prison.[8]

Calvin showed great insight in placing this event after the resurrection. However, several difficulties remain with his view.[9]

Prior to Jesus’s birth, David expressed comfort that God’s Spirit remains present even in Sheol, the place of the dead (Ps 139:7–12). Shortly before Christ’s crucifixion, Moses and Elijah appeared to some disciples in a radiance of glory, indicating they had already been made perfect (Luke 9:28–31). Yet, that Peter called the spirits “disobedient” (apeitheō) creates the most insurmountable issue for Calvin’s theory.[11]