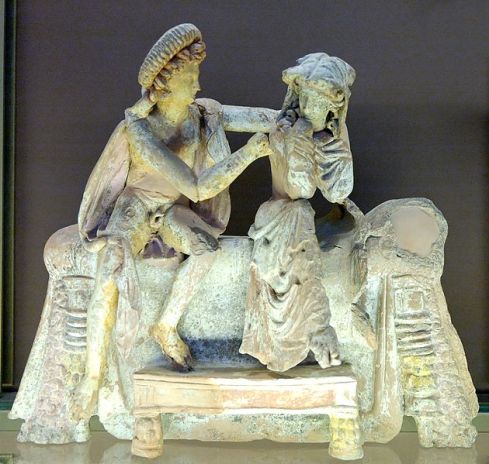 b) 1 Cor 11:4–6 and 1 Cor 14:34–35: In 1 Cor 11, Paul did not differentiate between acceptable ministry activities for men and for women. Instead, he addressed their physical appearance while participating in spiritual leadership.[1]

People living in the eastern Mediterranean of that era considered a woman’s failure to cover her hair as an act provoking male lust,[2] just as in many areas of that region and the Middle East today.

The statue above portrays a man removing his new wife’s veil in the privacy of their bridal chamber (ca. 150–100 BC).[3]

Going outside with her head uncovered constituted grounds for divorce in Jewish marriages (m. Ketubah 7:6).[4]

Apuleius, a writer from the second century AD, described a Roman householder’s seduction of a maidservant. By undressing and unbinding her hair, she “transformed herself to an image of Venus rising from the waves.”[5]

This stems from the ancient Greek view that the heads of both men and women produce semen which flows through hollow spaces in their hair.[6]

According to the fifth century BC physician Hippocrates:

As to the growth of hairs, it is as follows. They grow longest and most numerous where the epidermis is most porous and where the hair has a due amount of fluid for its nourishment.

Also, where the epidermis becomes porous later, there the hairs grow later too, namely, on the chin, the pudenda, and wherever else they grow.

For at the age when the semen is formed, the flesh becomes porous as well as the epidermis, and the veins open up more than before. For in boys, the veins are tiny and the semen does not flow out through them.

In girls, the same holds true with regard to the menses. At the same age, a way is opened for the menses and for the semen, and in both the case of the boy and the girl, the pudenda become hairy…

Those who are castrated in their childhood have neither hair on their pudenda nor on the chin and are smooth all over for the reason that no passage is opened up for the semen.[7]

This concept explains the rationale behind Paul’s bewildering question, “Does not nature itself teach you that if a man lets his hair grow long, it is a dishonor to him?” (1 Cor 11:14).

In both Jewish and Greco-Roman society, a woman in public with unbound hair conveyed sensual impropriety.[8]

Prophesying (prophēteuō) in the early church primarily involved proclaiming the salvation plan of God and delivering authoritative instruction based upon the Word of God to others. It did not refer to predicting future events.[9]

Later in the same letter, Paul delivered a seemingly contradictory command that, “Women in the churches should be silent…even as the law says” (1 Cor 14:34–35).

Thus, “law” here most likely refers to the Jewish oral tradition, as in this sentence from the Babylonian Talmud,[13] “Our Rabbis taught, “All are qualified to be among the seven [who read], even a minor and a woman, only the Sages said that a woman should not read in the Torah out of respect for the congregation” (b. Megilah 23a).

In Greco-Roman society, a married woman conversing with another woman’s husband constituted a scandal.[14]

For example, the influential author Plutarch (46–122 AD) wrote of a woman who suffered great embarrassment:

In putting her cloak about her [she] exposed her arm. Somebody exclaimed, “A lovely arm.” “But not for the public,” said she.

Not only the arm of the virtuous woman, but her speech as well, ought to be not for the public, and she ought to be modest and guarded about saying anything in the hearing of outsiders, since it is an exposure of herself; for in her talk can be seen her feelings, character, and disposition.[15]

Greco-Romans regarded a woman’s disclosure of her thoughts as unseemly as physical immodesty.

Another possibility involves the practice of inquirers asking questions about the future to the oracle at Delphi (Pythia), who resided close to Corinth.

Plutarch wrote, “It seems that our beloved Apollo finds a remedy and a solution for the problems connected with our life by the oracular responses which he gives to those who consult him.”[16]

Seeing God speaking through women in Corinth likely prompted their peers to interrupt the church service with pressing questions.[17]

Such behavior promoted disorder, a condition which Paul rejected (1 Cor 14:26–40).

Read 1 Cor 11:4–6 and 1 Cor 14:34–35. Why would a woman’s uncovered head have given offense while she prayed and spoke in church services? How should we observe Paul’s command in our culture? Why would Paul give instructions for women to pray and prophesy in church and then command their silence?

[Click here to go to Women and Marriage Throughout Redemptive History; or to Chapter 8: Pain and Desire (Genesis 3:16, 20)]

[1]Ciampa and Rosner, The First Letter to the Corinthians, 504.

[7]Hippocrates, On Intercourse and Pregnancy: An English Translation of On Semen and on the Development of the Child (trans. Tage U. H. Ellinger; New York: Schuman, 1952), 68–70, Https://archive.org/details/HippocratesOnIntercourseAndPregnancy/page/n33.

[8]Ciampa and Rosner, The First Letter to the Corinthians, 517.

[14]Ciampa and Rosner, The First Letter to the Corinthians, 725.

[17] Witherington, Conflict and Community in Corinth: A Socio-Rhetorical Commentary on 1 and 2 Corinthians, 287.