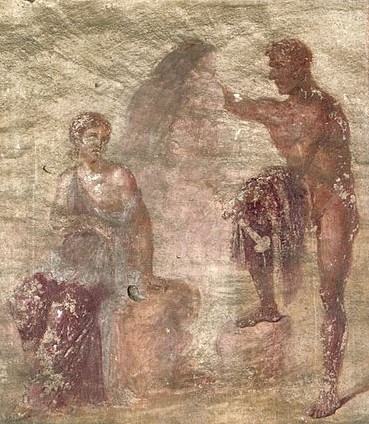 b) Jude 8: In this verse, Jude applied the examples from Jude 6–7 to the church’s situation.[1]

He wrote, “But in the same way, these [people] also by dreaming defile flesh, and reject authority, and speak irreverently of glories.”

Jude named the sins of the false teachers. By their sexual misconduct, mistreatment of angels, and defiance of God’s authority, they committed the same sins as some men in Sodom (Gen 19:1–9).[2]

Claiming to have experienced a dream from the Lord cannot validate what someone teaches,[4] particularly when that revelation contradicts Scripture (Col 2:18–19; 1 Thess 5:19–21).[5]

Evidently, these teachers appealed to their dreams for permission to indulge in sexual immorality. They asserted that God himself granted them sexual freedom, rather than recognizing that their behavior defiled them. This viewpoint enabled them to transcend the morality which applied to others.[6]

Even today, we see this on occasion: “God told me to divorce my wife and marry my girlfriend.”

In keeping with that attitude, the false teachers rejected authority. Jude did not employ the typical word for “authority” (exousia) here, which can refer to human governance, such as that of church officials.[7]

Instead, he used the term kyriotēs, which derives from the same root as “Lord” (kyrios).

Hence it signifies that these debauched people despised the majestic authority of God.[8] They denied the lordship of Christ by the way they lived (Jude 4).[9]

By writing that the false teachers “speak irreverently of glories,” Jude employed jargon familiar to his readers.

Since they participate in the majesty of God, “glories” serves as a euphemism for angels (Heb 9:5).[10] Indeed, the Greek word doxa means both “glory” and “a transcendent being deserving of honor.”[11]

The apocryphal Testament of Judah states, “For he saw in a vision concerning me that an angel (doxa) of might followed me everywhere, that I should not be overcome.”[12]

Jude did not mince words: these people blasphemed (blasphēmeō) angels. “Blasphemy” carries the nuance of “slander, revile, defame, speak irreverently/impiously/disrespectfully of or about.”[13]

These false teachers failed to give angels the honor due to them.[16] Due to the context of Jude 9, the author was referring specifically to demons.[17] Thus, their sin consisted of belittling the supernatural forces of evil.[18]

Even though participation in evil deforms the majesty of demonic forces, some of that glory remains.[19] One can indeed slander Satan (2 Pet 2:9–11).[20]

Notably, throughout Jude 6–8, the author never claimed that angels engaged in sexual activity with human women.[21]

Consequently, even in light of this passage, most NT scholars reject that “the sons of God/the gods” in Gen 6:1–4 consist of fallen angels. They conclude that Jude did not endorse 1 Enoch as truth but cited popular tradition to make his point about the false teachers.[22]

As a result, the NT does not contradict predominant view of OT scholars that “the sons of the gods” were human rulers.[23]

Read Jude 8. How were the false teachers similar to the men of Sodom? What would happen to those leaders? When is it dangerous to accept a person’s claims of inspired revelation as true? Why do most current NT scholars reject the idea that “the sons of God” were angels?

[Click here to go to Women and Marriage throughout Redemptive History; or to Chapter 5: Groaning and Grieving (Genesis 5:28–6:8)]