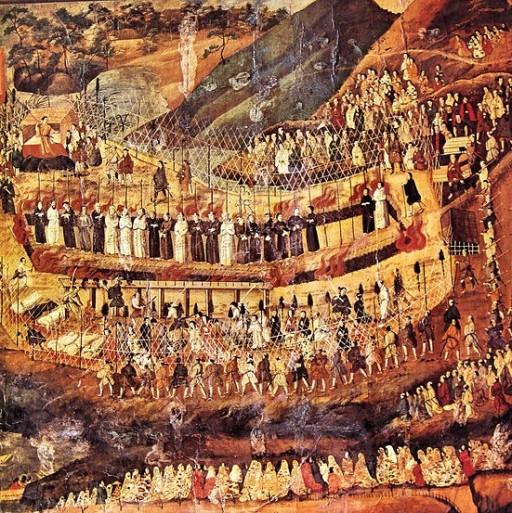 b) Rev 6:11: For people in Greco-Roman culture, clothing represented a person’s identity.[1]

In this verse, God responded to the martyr’s plea in Rev 6:9–10 symbolically, giving each of them a white robe. White robes denoted the purity which resulted from persevering in faith (Rev 3:4–5).[2]

This garb also connoted salvation, victory, and immortality.[3] Therefore, the Lord declared them righteous despite the world’s guilty verdict.[4]

Then these martyrs were told to “rest a little longer.”

C. S. Lewis captured this concept well. When the Christ-figure told Lucy that he would return shortly, she asked, “Please, Aslan…what do you call soon?” He replied, “I call all times soon.”[6]

What the martyrs eagerly anticipate will occur when “might be completed also, [the number of] their fellow servants, their brothers [and sisters], the ones about to be killed even as they [had been].”

The apocryphal book of 1 Enoch expresses this same concept:

And in those days shall have ascended the prayer of the righteous, and the blood of the righteous from the earth before the Lord of Spirits. In those days the holy ones who dwell above in the heavens shall unite with one voice and supplicate and pray…that judgment may be done unto them…

In those days I saw the Head of Days when he seated himself upon the throne of his glory, and the books of the living were opened before him…

The martyrdom of believers falls within the plan of God. Their deaths shall inaugurate the coming of the Kingdom in all its fullness,[8] making these Christians very important in determining when the Lord returns.[9]

Nero’s victims in John’s era were soon followed by those who died under other Roman emperors.[10]

Shortly before his persecutors burned him to death, he testified, “Thou hast granted me this day and hour, that I might receive a portion amongst the number of martyrs…May I be received among these in Thy presence this day, as a rich and acceptable sacrifice.”[12]

May we stand as firmly as Polycarp did, through whatever trials we undergo.

Read Rev 6:11. Why were the martyrs given white robes and told to wait a little longer? How do their deaths affect the timing of Christ’s return? What gives you the ability to stand firm under great pressure?